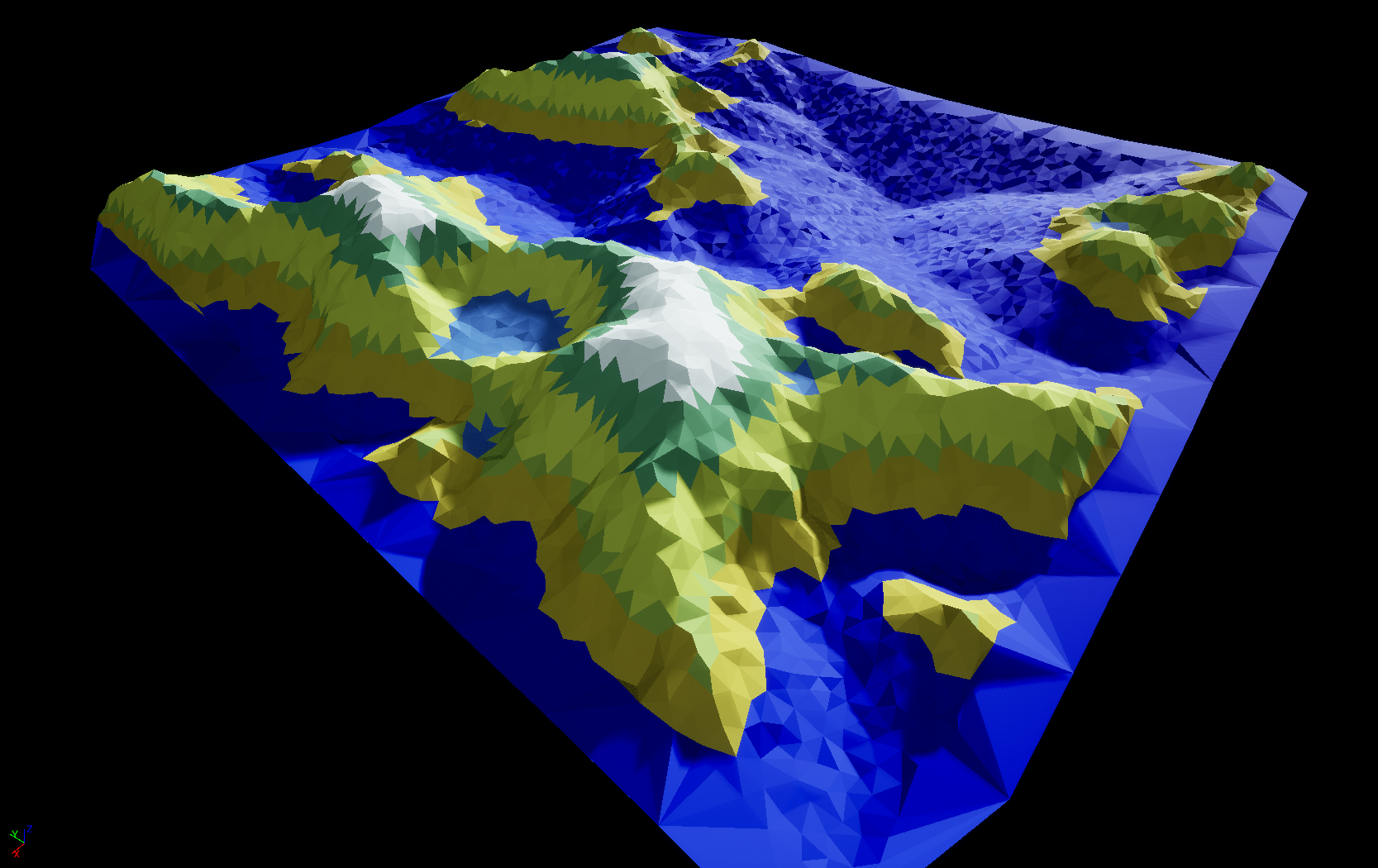 This is a port of the JavaScript code of Red Blob Games’ Polygonal Map Generation for Games.

It supports Unreal Engine version 4.21.x; you can probably use it for earlier/later versions of the Unreal Engine, but you may have to make slight modifications. 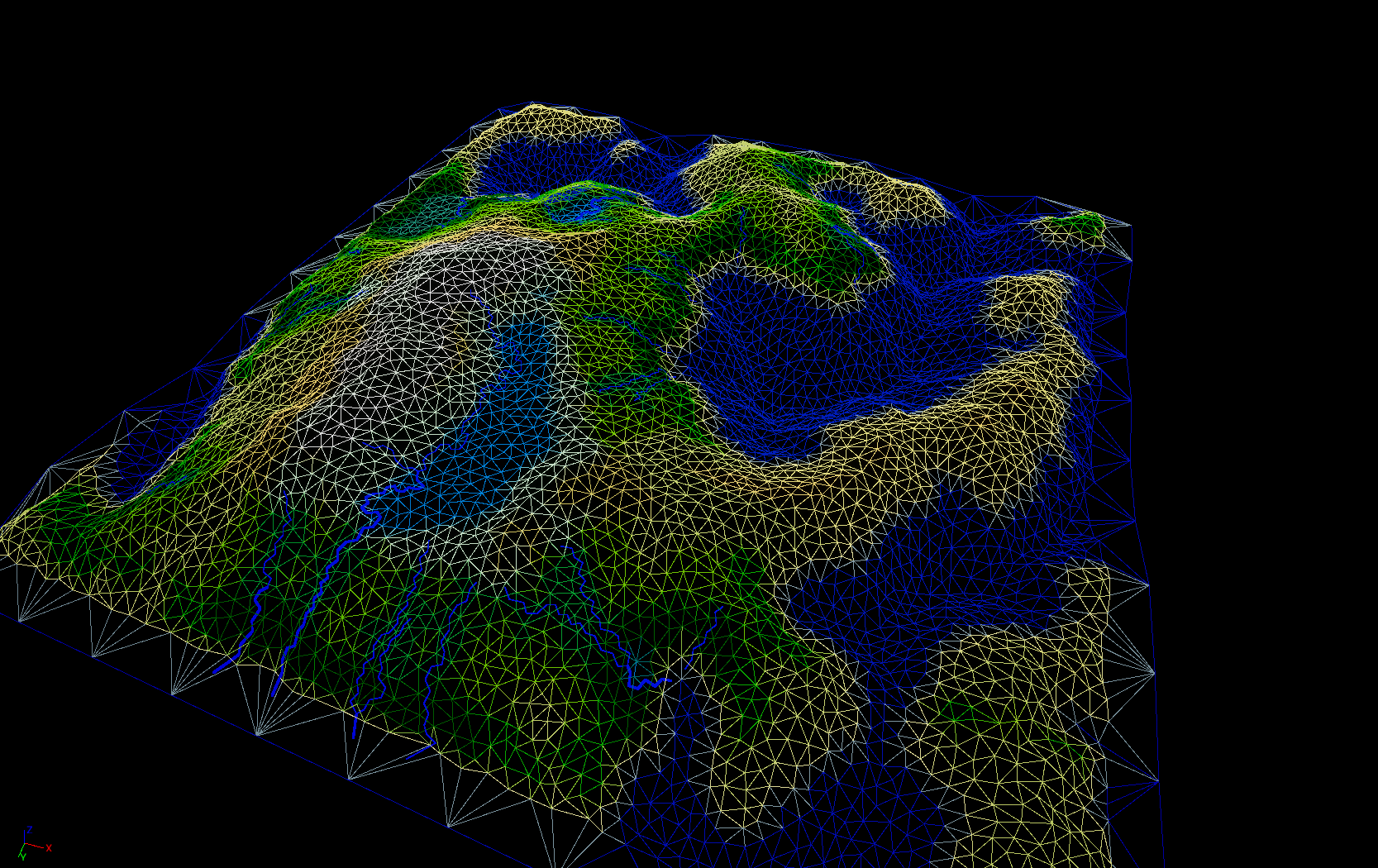 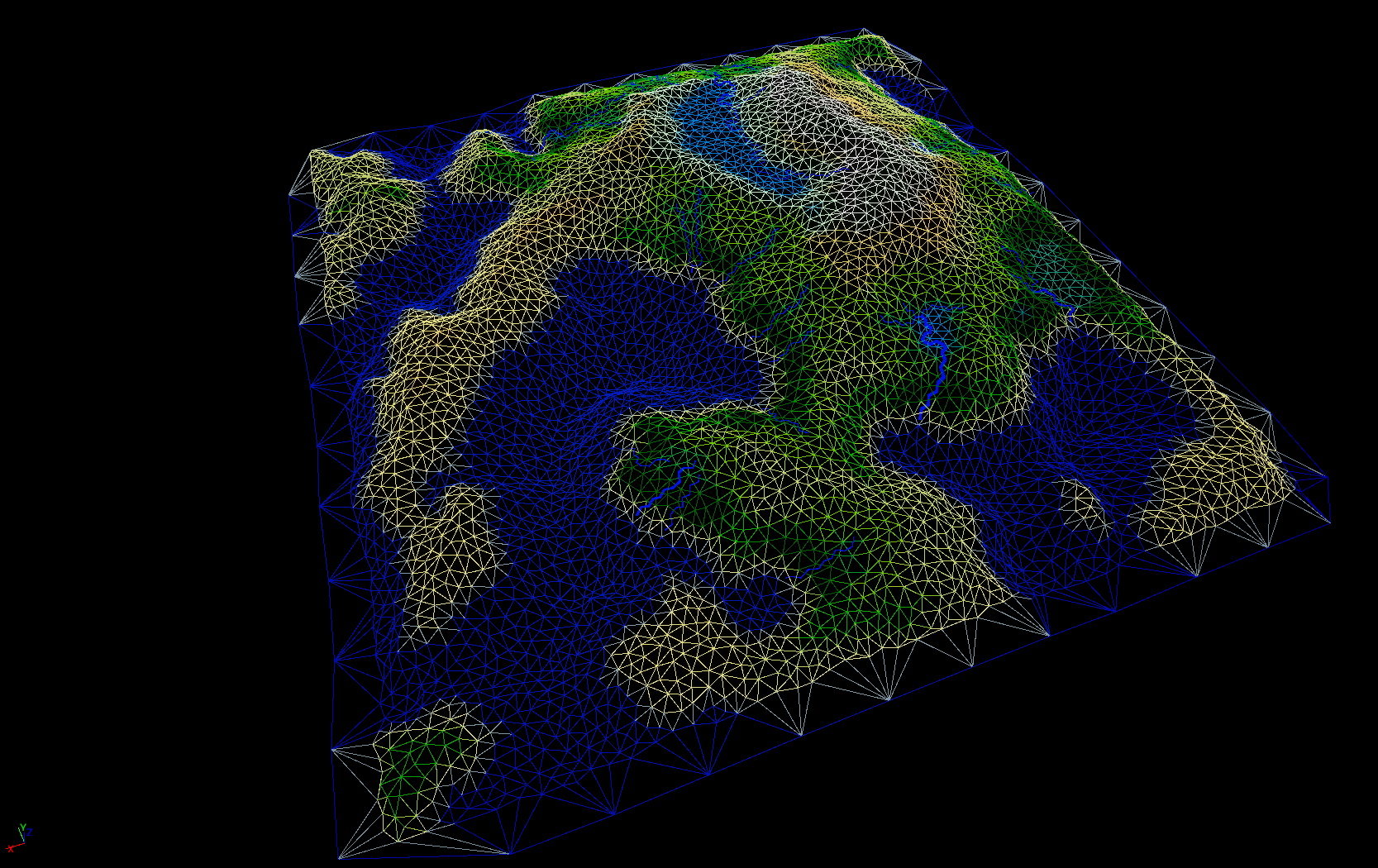 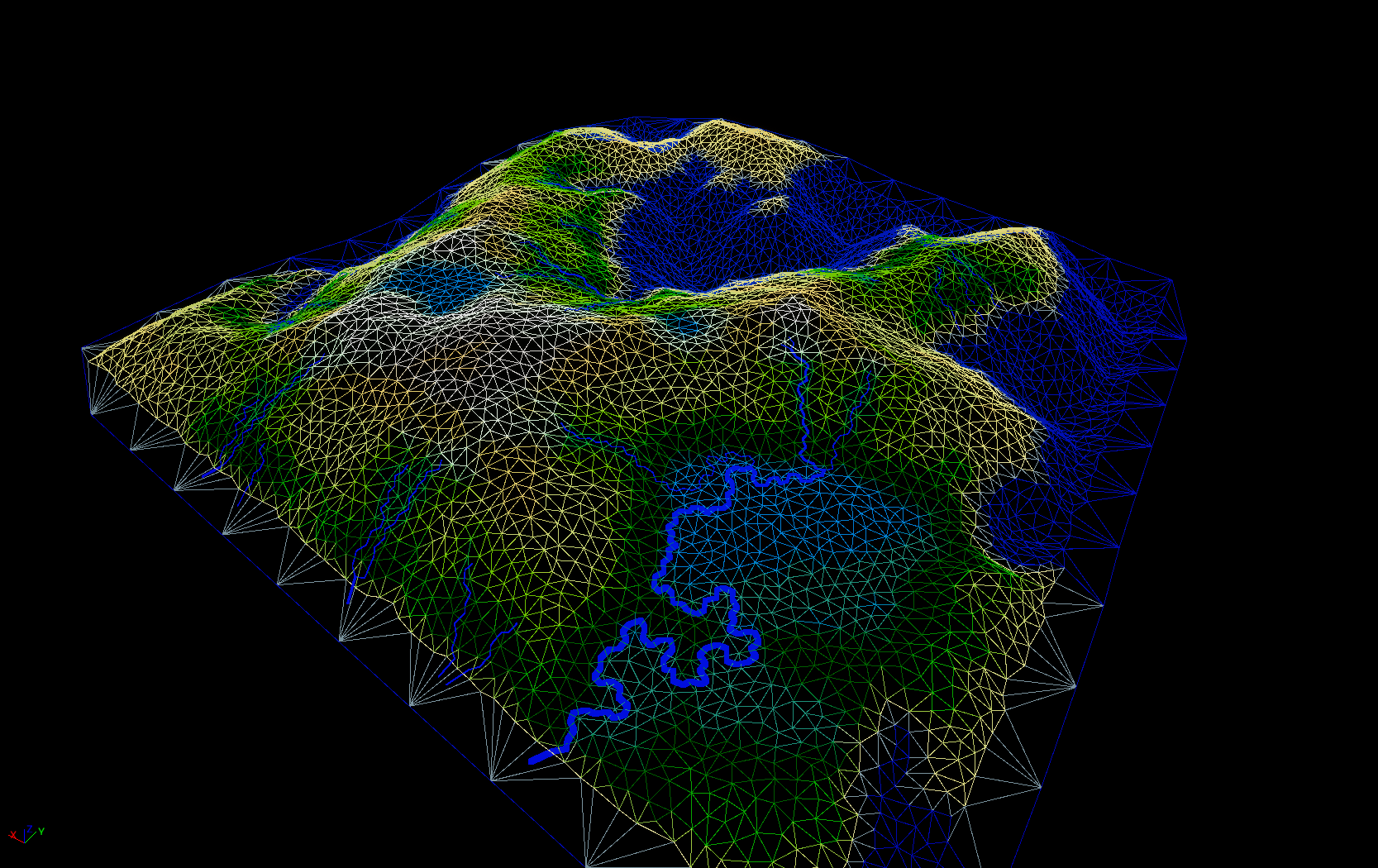 This version is designed to be a fairly barebones port; if you need extra features, I’ve created a downstream fork which supports things like procedural river names.

If you only want to access everything through Blueprint, you can just clone this project into your <Project Root>/Plugins folder, where <Project Root> is where the .uplugin file is kept. You may have to create the Plugins folder if you haven’t made it already. From there, you should be able to drag the pre-made Blueprints into your scene, create new custom Blueprints, or do whatever else you need.

In the past, I have gotten linker errors by not listing this in the .uproject file when trying to package a project. People have said you don’t need to do it nowadays, so you might be able to skip this step — even so, I’m listing it here in case any problems arise.

This lets Unreal’s Blueprint reflection system “see” your plugin and know to compile it before it compiles the rest of your code, so that you don’t get weird linker errors when using things from the plugin.

Once you have the project set up, you should be able to see it in the sidebar of the Content Browser; simply scroll down to “Polygonal Map Generator.” You’ll see 2 folders — “Content” and “C++ Classes.” If you don’t see it in the Unreal Engine editor, make sure to turn on “Show Plugin Content” in the view options in the bottom-right corner.

There’s a couple “main” classes which make everything tick:

The main exception to IslandWater, which gives various examples on how to create islands of different shapes and sizes — IslandSquareWater makes a square island (probably not very useful), IslandRadialWater makes a (mostly) circular island using overlapping Sine waves, and IslandNoiseWater uses simplex noise to create the shape of islands. Of these, I think IslandNoiseWater looks the best — you can see pictures of the islands it generates at the top of this README file.

There is also an additional file that’s not in the source repo, under the “Mesh” folder — IslandMeshBuilder. There’s a couple subclasses IslandSquareMeshBuilder and IslandPoissonMeshBuilder. These lay out the actual vertices used in island creation; in the source repo, the mesh gets passed down with the points already added. These classes govern different ways to lay out the points — IslandSquareMeshBuilder will do it in a uniform grid, whereas IslandPoissonMeshBuilder uses a poisson distribution to pseudo-randomly lay out all the points.

You can mess around with the data assets, creating new subclasses and overriding base methods. Unlike “normal” data assets, these assets should work with Blueprint, if needed.

If you wanted to implement custom water generation, a good way to do so would be to create a new C++ class that inherits from the IslandWaters class and then override whichever method you want to change. Inside Unreal, right-click inside a content folder, then navigate to Miscellaneous -> Data Asset and create a new instance of your custom IslandWaters data asset. Go back to the IslandMap and update the water data asset to point to the one you just made, and it should “just work.”

There’s also a number of places to “hook” into the island generation code if you wanted to modify the existing logic of a certain step or add your own implementations.

As I mentioned, I tried to keep this port pretty close to the original. I’ve added a couple things for convenience, such as actual mesh generation as well as a data structure to keep track of rivers (URiver). However, while the rivers are placed, they do not get rendered and the underlying mesh is still the same — you’ll have to either roll your own option or look at that downstream fork I mentioned earlier.

Speaking of mesh generation; it’s not perfect — it does its best to match each triangle to an individual biome for the purposes of assigning materials, but it comes out a bit jagged.

Because mapgen4 wasn’t open-source yet when I started refactoring all the code from mapgen1 to mapgen2 (as far as I can tell, there is no mapgen3).

I’m not the biggest fan of mapgen4. In the future, I may borrow some concepts regarding river representation, and I do enjoy how the rivers get laid out. I’m also unhappy with the current way of determining elevation (it’s just distance from the nearest coastline), and I like the idea of having moisture determined by rainfall.

However, I don’t like how mapgen4 looks. It’s a different approach to things — it goes for a “handcrafted map” look, but that means there’s a very distinct change division between hills and mountains, that’s not very realistic. It’s also designed in a way to let the user paint it; again, this is a cool idea, and one I might try to implement someday, but it’s not the goal I was going for with this project. Ultimately, while there are some cool aspects to it (linked above), I prefer the way that mapgen2 feels (for the most part).

A map converter for the 2002 game Platypus
05 February 2022
VR15: a VR FPS game controller that generates haptic feedback with high-pressure air
29 January 2022
Make sure you have the compiled binaries in the working directory of your program
13 August 2022