Cryptography is a technique of securing information and communications through the use of codes so that only those person for whom the information is intended can understand it and process it. Thus preventing unauthorized access to information. The prefix “crypt” means “hidden” and suffix graphy means “writing”. In this article, a type of cryptographic technique, Shamir’s secret sharing algorithm is discussed.

Approach: The main idea behind the Shamir’s Secret Sharing Algorithm lies behind the concept that for the given K points we can find a polynomial equation with the degree (K – 1).

Initially, in order to encrypt the secret code, we build a polynomial of degree (K – 1).
Therefore, let the polynomial be y = a + bx. Here, the constant part ‘a’ is our secret code.
Let b be any random number, say b = 15.
Therefore, for this polynomial y = 65 + 15x, we generate N = 4 points from it.
Let those 4 points be (1, 80), (2, 95), (3, 110), (4, 125). Clearly, we can generate the initial polynomial from any two of these 4 points and in the resulting polynomial, the constant term a is the required secret code.
In order to reconstruct the given polynomial back, the Lagrange basis Polynomial is used.
The main concept behind the Lagrange polynomial is to form the Lagrange’s identities first and the summation of these identities give us the required function which we need to find from the given points. The following equations show how to compute them:

For example, let’s say we wish to compute the given equation by using K = 2 points from the selected four points- (1, 80), (3, 110). The following illustration shows the step by step solution for this: 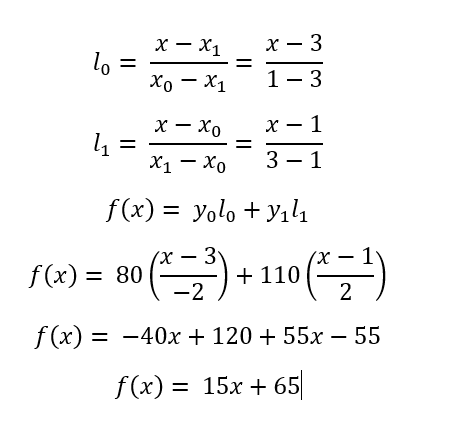 The implimentation of this can be found in the SSSA.cpp file.