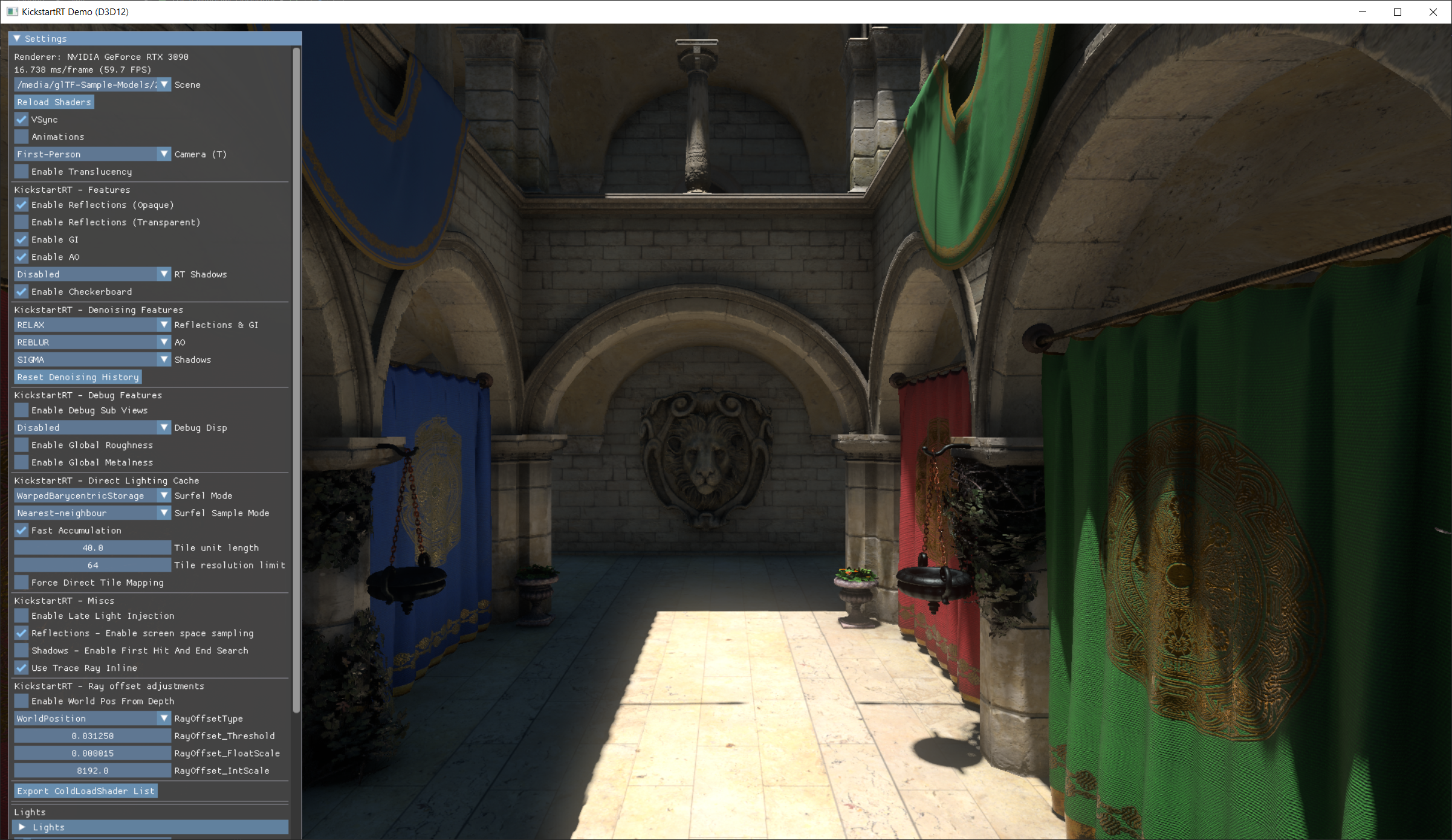 This repository is forked from NVIDIAGameWorks/donut and added main rendering loop with some customization on the Donut framework. On top of Donut framework, there are following submodules for this demo application.

This application is designed to provide an example integration of the Kickstart RT SDK. By using Donut framework, it handles three different graphics APIs in the same binary on Windows. You can switch the current graphics API by simply providing an argument when executing the application. In addition to browsing the sample code, we encourage you to check out the README.md and docs in the KickstartRT SDK repository, that includes requirement for other dependent SDKs and the GPU.

Kickstart_Demo is built using CMake, so the build instructions are pretty standard.

Where is the main()?

The main part of the application is written in KickstartRT_demo\KickstartRT_Sample_Main.cpp. It is written in a verbose manner to support D3D11,12 and VK at the same time, but it is written as plainly as possible. It uses the three command lists to record rendering commands of Kickstart RT.

And, most of the interactions with the SDK are written in the following function, where it may be interesting to look into.

The following sections are the original README contents from Donut framework.

Donut is a real-time rendering framework built by NVIDIA DevTech for use in various prototype renderers and code samples. It provides a collection of reusable and somewhat extensible rendering passes that can be put together in an application, and a system for loading a scene and maintaining its component graph.

Donut is not a game engine. It does not provide any means for creating interactive experiences, such as actors or navigation.

Donut has originated from the VRWorks Multi-Projection SDK and has been improved and evolved since. Different versions of Donut have been used to build the Asteroids demo, the DLSS SDK, and the RTXDI SDK.

Required (all included as git submodules):

Optional (also included as git submodules but can be disabled through CMake variables):

Example projects that use Donut can be found in a separate repository: donut_examples.

Donut is not set up to be built as a separate project. It should always be included as a submodule into a larger CMake-based project. Follow the instructions for each project to get it built.

The engine and render modules require some shaders, which can be found in the shaders folder and built with the donut_shaders target.

Most interaction with graphics APIs is done through the NVRHI abstraction layer. Donut and NVRHI support the following GAPIs:

Note that NVRHI does not provide any means to create the GAPI devices or windows, that functionality is handled by the DeviceManager class and its descendants in donut_app.

In this version, Donut can only import glTF 2.0 models with some limitations:

In addition to glTF, Donut supports its own JSON-based scene layout files. Those files can load multiple glTF models and combine them into a larger scene graph, also add lights, cameras, animations, and apply animations to scene nodes imported from the models using their paths.

For a full list of render passes, refer to the headers in the include/donut/render folder.

The most useful passes are:

Donut does not provide any ray tracing passes or even maintain acceleration structures (AS’es). That is mostly because the requirements for ray tracing AS’es are different in each application, and those affect the passes that use the AS’es. But it does provide a generic bindless resource table that is populated with textures and geometry data buffers when the scene is loaded. Building acceleration structures for a scene can be easily handled on the application side using the data structures provided by Donut’s scene representation and the NVRHI abstractions.

The draw call batches are decently optimal and you can render them later, in your app or even remotely
13 August 2022
Small CLI application for managing a todo.txt
06 July 2022
Software for ESP32 to talk to Hoymiles Inverters
25 June 2022