Header-only double ended vector implementation for efficient insertions/removals at both the start & end of it at the expense of an extra pointer.

devector keeps a dynamic array internally which it uses to store its objects. It differs from std::vector from the fact that begin() isn’t necessarily pointing to the start of the array, it’s instead up to the user to decide. 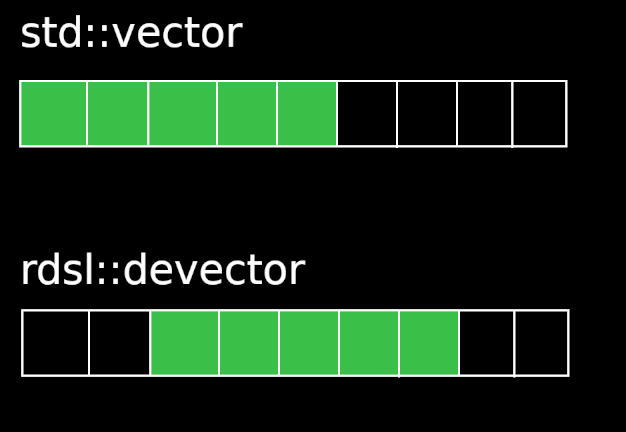 In order to control where begin is placed, a third template parameter named OffsetBy is introduced which should have a method with the following signature:

The one and only parameter is the count of free slots inside the array at any given moment the method is called.
It should return an integer which is going to be begin‘s offset from array_begin. You are free to make the method static, const, noexcept or whatever else you desire. The default implementation is this:

The offset is used upon reallocations, assignments of any sort, or shifting caused from operations such as insert, erase operator= etc…

A general rule of thumb is that whenever an operation has to move and/or copy things around, devector will automatically place them in the desired position according to the offset.

As a consequence of the above, if you make a custom OffsetBy class that always returns 0 as offset, the behavior should be exactly the same as std::vector.

If needed in the future offset_by_traits shall also be introduced.

Which methods differ from std::vector and how

This container implements the very same methods the standard does, following exception safety rules, iterator validity and even thread-safety wherever possible. The differences are in fact:

each of which does exactly the same their x_back() pair does but for the front instead. resize() still exists and defaults to resize_back().

Every constructor or operation that previously had an optional allocator_type& alloc parameter now also has an optional offset_by_type& off_by type.

You are absolutely welcome to report bugs, contribute by solving issues, or even help build C++14, C++17, and C++20 versions.

A custom c++ vector implementation
11 March 2022
Gyselalib++: A collection of C++ components for writing gyrokinetic semi-lagrangian codes and similar
02 March 2022
Implementation of a template class for storing data in any type
02 February 2022